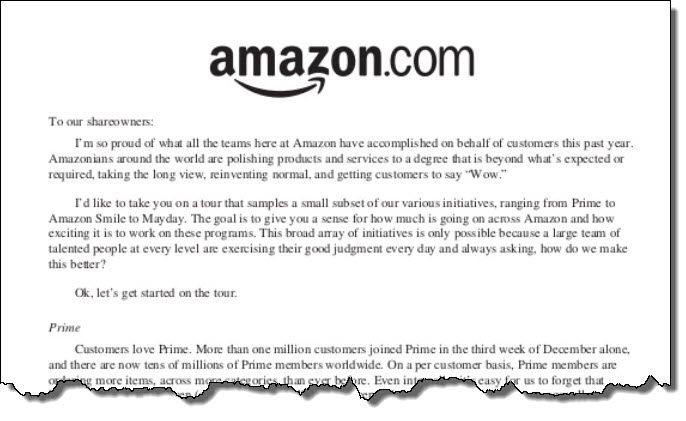 In 2005 Blair Warren wrote a book called “The One Sentence Persuasion Course”.

Fair warning, this is not our typical update on retail trends and e-commerce. This past week has offered the rare opportunity of a second written document from Jeff Bezos in a calendar year and I wanted to take a few minutes to reflect on 5 takeaways.

That one sentence consists of these 27 words; “People will do anything for those who encourage their dreams, justify their failures, allay their fears, confirm their suspicious and help them throw rocks at their enemies.”

After reading Mr. Bezos’ 4540 word letter, this book was the first thing I thought of.

In the letter he masterfully invokes empathy and emotion before helping us rationalize Amazon’s innocence and it’s worth looking at how.

Whether you’re convincing customers to join your product movement, building a case for potential investors, or trying to convince the U.S. Government that your company isn’t anti-competitive, these 5 examples are likely to make your story even more persuasive.

After recounting the stories of how his parents and grandfather overcame adversity he helped us understand his entrepreneurial roots.

“I took these lessons to heart as a teenager, and became a garage inventor. I invented an automatic gate closer out of cement-filled tires, a solar cooker out of an umbrella and tinfoil, and alarms made from baking pans to entrap my siblings.”

The richest person on the planet makes himself seem relatable by first telling us about his own failures.

“It took more than 50 meetings for me to raise $1 million from investors, and over the course of all those meetings, the most common question was, “What’s the internet?”

He then helps us justify our own failures by praising risk-takers.

“Unlike many other countries around the world, this great nation we live in supports and does not stigmatize entrepreneurial risk-taking.”

He continues to mitigate our fear of inadequacy by reminding us that Amazon was at one time the underdog too.

“Smart analysts predicted Barnes & Noble would steamroll us, and branded us “Amazon.toast.” In 1999, after we’d been in business for nearly five years, Barron’s headlined a story about our impending demise “Amazon.bomb.” My annual shareholder letter for 2000 started with a one-word sentence: “Ouch.”

Now is time for the magic. He knows that even though we feel like we can relate to this story, there must be some secret sauce or way for us to rationalize his extraordinary level of success.

In my opinion, this is the most important paragraph in the whole letter.

“In my view, obsessive customer focus is by far the best way to achieve and maintain Day One vitality. Why? Because customers are always beautifully, wonderfully dissatisfied, even when they report being happy and business is great. Even when they don’t yet know it, customers want something better, and a constant desire to delight customers drives us to constantly invent on their behalf. As a result, by focusing obsessively on customers, we are internally driven to improve our services, add benefits and features, invent new products, lower prices, and speed up shipping times—before we have to. No customer ever asked Amazon to create the Prime membership program, but it sure turns out they wanted it. And I could give you many such examples. Not every business takes this customer-first approach, but we do, and it’s our greatest strength.”

He’s going to bat for us, the customer, and this story makes logical sense. How could you not be rooting for him at this point?

One Sentence Persuasion Step 5 – Throw rocks at our enemies.

Just in case you live in Alaska and weren’t able to associate with the identity of a free two-day shipping prime member he broadens the net.

“Who do Americans trust more than Amazon “to do the right thing?” Only their primary physicians and the military, according to a January 2020 Morning Consult survey. Researchers at Georgetown and New York University found in 2018 that Amazon trailed only the military among all respondents to a survey on institutional and brand trust.”

This statement positions being anti-Amazon as un-American.

to GLOBAL RETAIL (including offline).

“Amazon accounts for less than 1% of the $25 trillion global retail market and less than 4% of retail in the U.S. Unlike industries that are winner-take-all, there’s room in retail for many winners.”

By doing so he not only reinforces community and his “day one” approach but also, somehow, makes Amazon seem like the underdog even though we’ve talked about how Amazon could be worth $3T by 2025.

To close it all out, he repeats almost every point again,

“It’s not a coincidence that Amazon was born in this country. More than any other place on Earth, new companies can start, grow, and thrive here in the U.S. Our country embraces resourcefulness and self-reliance, and it embraces builders who start from scratch. We nurture entrepreneurs and start-ups with stable rule of law, the finest university system in the world, the freedom of democracy, and a deeply accepted culture of risk-taking.”

Hopefully, as an actual underdog, this summary encourages you to share more of your story with the world.